“Top potato growers get their rewards for work”

Welcome to the forty second Annual General Meeting of the Association, held again this year in Harrogate in conjunction with the Potato Council’s British Potato 2013. As in past years we are grateful to the Council for making the Press Room here at Harrogate available for our AGM.

Our membership has shown a small increase this year and we now have 45 full members and 15 associate members.

As in past years, the Association has been consulted by the Scottish Government, by Defra and by the Potato Council Ltd on a number of seed issues and our office bearers have attended a number of meetings on your behalf. Earlier this year we were consulted by the Council on its proposal to fund research on potato blackleg. I met with members of the Council’s R and D committee and emphasised the importance of controlling infection during the multiplication of early generation seed. Later in today’s meeting Professor Ian Toth of the James Hutton Institute will bring us up-to-date with work on this project.

In addition to this Council funded work on blackleg, four of our members, Middleton Rosefarm, Craggie Farms, J S Cruickshank and Whitewater Potatoes have been involved in the collection of samples of growing crop and on the harvester for Pectobacterium analysis. We await the findings.

Following last year’s Seed Event at Crieff, Bill Rennie and I attended the annual meeting of the UK Consultative Panel where we discussed a range of certification and plant health issues. This year’s meeting of the Panel will be held here at Harrogate Pavilion later this afternoon and Bill and myself will be attending.

Work continues on the revision of Annexes I and II of the EU Seed Potato Marketing Directives and we have had several meetings with John Kerr of SASA on this subject. We have also been consulted by the Scottish Government on its review of fees for UK National Listing and Plant Breeders Rights.

The Association is one of the relatively few industry organisations consulted by the Scottish Government on seed potato issues with the opportunity to contribute to consultations, and to influence their outcome; this is taken seriously by your committee on behalf of the membership.

We held our usual February committee meeting at Kincraig near Aviemore. Thanks again to Dr John Anderson & his wife Frances for providing the venue and their hospitality.

The main summer study visit, attended by 18 Association members, was made in late June to the North Calais Region of France centred in Arras to look at early generation seed production in the 11,000 hectares controlled by the Comite Nord. This proved to be a very valuable and interesting visit looking at mini tuber production, disease control and certification arrangements in an area that has seen a significant expansion in recent years. We are very grateful to our hosts Desmazieres for arranging the various visits and for their excellent hospitality while we were in France.

A second field study visit was made in mid-July when over 30 members of the Association accepted the invitation of McCain Potatoes to look at a range of field trials and seed production fields near Montrose. This event was the third successive annual visit organised by the Association that came about on the back of the issues growers were having with Erwinia. The get together provides a venue for growers to discuss how the growing season crops are progressing and any issues they are having. We are grateful to Colin Herron and Rob Scott of McCain for hosting what was another excellent visit. The visit was supported by Eric Anderson of Scottish Agronomy, Matt Smallwood of SRAC and by John Kerr, Denise A’Hara and Maureen McCreath of SASA. Their attendance encouraged wide ranging discussions.

Your committee has decided that this year the Association’s Dr James Hardie Memorial Award will go to Hamish Cameron of Highland Potatoes Ltd, based in the Blackisle. Hamish has been growing early generation seed since the early days of VTSC material and has been a strong supporter of the Association almost since its inception. The award was presented to Hamish at last night’s Industry Dinner. Highland Potatoes Ltd continue producing this High Grade material with the next generation following in Hamish’s footsteps under his expert eye.

The Association’s website has recently been updated to show current office bearers and committee members, information on recent Dr Hardie Awards and my chairman’s report for the past year. Ideas on future topics for the website will be welcome.

John Kerr of SASA continues in his role as technical adviser and I should like to thank him and his many colleagues from SASA for their continued guidance and technical support. John plays a leading role in EU committees involved in reviewing the Seed Potato Marketing Directive and we value the opportunity to contribute here. As always, we are grateful for the excellent working relationship we have with John Speirs and his Scottish Government colleagues in Saughton House. And I am especially grateful for the support I have received from my committee over the past year. I look forward to a further year as chairman of the Association.

We still have a few Association ties available for sale. If you don’t yet have one see Bill Rennie after this meeting.

Thank you for your attendance at today’s AGM. 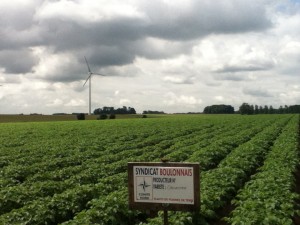 18 members of the Association participated in a study visit to Northern France over the three days 26 – 28 June 2013. The visit was hosted and organised by staff of the potato company Desmazieres, a sister company of Agrico. The aim of the visit was to look in detail at early generation seed production in the area of Northern France overseen by the Comite Nord, the industry body charged with controlling seed potato production in the area.

Almost 12,000 hectares of classified seed potatoes are grown by 400 growers in the Comite Nord area. These include varieties grown for processing, for supermarket sales and for starch. There are two other seed growing areas in France – in Brittany where 5,000 hectares are grown and in the Centre and South of France with 1,000 hectares. Each area has its own, industry controlled, inspection service, justified on the grounds of distance between each area.

The Comite Nord has a very impressive head quarters and modern laboratory facility in the north of the region at Bretteville Du Grand Caux, built, apparently, from funding provided by the 400 seed growers at a cost of 11 million euros. The organisation is entirely industry controlled and includes 25 seed companies in addition to the 400 growers. 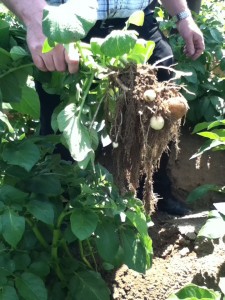 Growing crop inspections appear to be less formal than in Scotland with Comite Nord inspectors visiting crops on a weekly basis. Following harvesting stocks also seem to be inspected on a regular basis. The organisation employs 25 dedicated seed potato inspectors – they work full time for Comite Nord and have no responsibilities other than for seed potato inspections. In addition to the 25 full time inspectors the organisation employs 40 laboratory technicians for the range of tests done on growing crop material and harvested tubers. A further 15 specialist scientists are employed on research projects.

As in Scotland all fields intended for seed production are sampled and tested for Potato Cyst Nematodes ( Globodera rostochiensis and pallida). According to the information we were given live cysts are found in very few of the samples. Typically, one sample may contain live cysts each year. For the 2013 season no cysts were found in any of the soil samples tested. These surprisingly low results appear to be related to the absence of any movement between farms of farm saved seed.

Blackleg, mainly caused by Dickyea species, seems to be an issue at growing crop inspections though data for rejections and downgradings were not given.

Interestingly, there was no requirement for field separations between pre basic seed crops and this surprised many participants.

Following harvest all seed crops are inspected and tubers are taken for laboratory testing at the Comite Nord head quarters. 100 or 200 tubers are tested from each seed stock depending on class and grade. Around 1 million tubers are tested each year. Tests are made for tuber borne viruses and for the quarantine bacteria that cause brown rot (Ralstonia solanacearum) and ring rot ( Clavibacter michiganensis). Around 500 hectares were rejected in 2012 due to virus infection. The quarantine bacteria have never been recorded in any of the tests made by Comite Nord. Interestingly tuber samples are also grown out by Comite Nord to monitor for glyphosate damage. This seems to be a small but regular problem and around 50 hectares are rejected each year.

Comite Nord’s seed certification responsiblities are overseen by the French Government who have ultimate responsibility to ensure that the EU requirements for seed potato production and certification are met but this supervision appears to be with a very light touch and we were certainly given the impression that all day to day control inspections are the responsibility of Comite Nord.

Certification costs seemed to be in the region of 500 euros per hectare which cover PCN sampling and testing, growing crop inspections and the routine tuber testing following harvest. Other laboratory tests are available at additional costs and, for example, the Comite Nord make around 200 DNA tests each year to confirm variety identification. 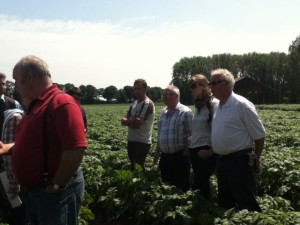 Overall, seed production conditions seemed to be very favourable – the land was relatively flat, stone separation before planting was often not required or practised and with an annual rainfall of around 1000 mm irrigation is usually not required. A further major advantage that seed growers in Northern France have is their close proximity to the extensive potato growing areas in France and Belgium.

Farms appeared to be largely family owned and run and land owning regulations in France appear to keep average farm sizes around 100 hectares. Seed growers regularly rent land at around 1700 euros per hectare. We had the impression that Comite Nord also control the overall area of seed production and it seemed unlikely that new growers could begin production without their approval.

In our short two day visit it was possible only to have an overview of seed production in Northern France and though there were some obvious differences between seed production systems in France and in Scotland more time would have been needed to examine these differences in detail. The relationship between Comite Nord and its seed growing members seemed to be very positive and we came away with the impression of a very efficient organisation, technically competent, flexible in its approach to inspections and testing and committed to supporting the seed industry in Northern France. All participants considered the study visit useful and worthwhile. The programme organised by Desmazieres staff Martine Bernardy and Edouard Fourrier included visits to ware and seed growers as well as to the head quarters of Comite Nord and their arrangements for accommodation in Arras and for lunch time meals and evening dinners were excellent. We are extremely grateful to them for their planning and hospitality.

Participants on the French Study Visit

Friday 27 June Tour of Arras and the Boves

Travel by Ryanair to Edinburgh

Our Association has been asked to contribute to the following Government Consultation.

Please contact our secretary if you wish to contribute via the Association. You may also respond directly to the Scottish Government.Responses must be received by the Government by 29th January 2010.

Our Association has been asked to contribute to the following Government Consultation Implementation in Scotland of Directive 2007/33/EC on Control of Potato Cyst Nematodes: Consultation on Fees and Partial Regulatory Impact Assessment